Call of Duty: Modern Warfare is the sixteenth entry in the Call of Duty series and is also a soft reboot of the Modern Warfare series. The story has been described to be more darker and realistic than previous Call of Duty games. It will be set in a separate timeline away from the other Modern Warfare games (however, characters such as Captain Price and other fan favorites from the series will be making a return). The game was officially revealed on May 30, 2019, and is set to release on October 25, 2019.

This is the official COD Modern Warfare launch trailer from YouTube.

This is a list of COD Modern Warfare social media profiles on various platforms.

This is the official COD Modern Warfare Twitch live stream.

Official Twitter account for Infinity Ward, a developer and the original creators of @CallofDuty. Games rated M by the ESRB. Support questions to @ATVIAssist

Playlist Update! BR Buy Back Quads is now live across all platforms in #Warzone! 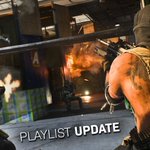 This is a playlist of all of the official COD Modern Warfare YouTube channel videos.

This is the 16th title in the Call of Duty video game series published by Activision. Call of Duty is a first-person shooter video game franchise published by Activision. Starting out in 2003, it first focused on games set in World War II, but over time, the series has seen games set in modern times, the midst of the Cold War, futuristic worlds, and outer space. The games were first developed by Infinity Ward, then also by Treyarch and Sledgehammer Games. Several spin-off and handheld games were made by other developers.

Call of Duty became competitive and players were able to start competing for money both online and offline through various tournament organizers. The most popular and arguably the most successful organization in regards to Call of Duty was Major League Gaming (MLG). Activision bought MLG and then created the Call of Duty World League. This was a successful years long tournament ran by the same people that operated MLG before the acquisition. Then in 2020, Activision decided to create the Call of Duty League. The COD League is a city based franchise league similar to Activision’s Overwatch League.

This is a list of all known professional Call of Duty Modern Warfare players.

This is a list of all known professional Call of Duty Modern Warfare teams.