Frosty, also known as Bradley Bergstrom, is a professional Call of Duty player and a professional Halo player. He is also a two time Halo World Champion.

Frosty, also known as Bradley Bergstrom, is a professional Halo player and a professional Call of Duty player. He is also a two time Halo World Champion. 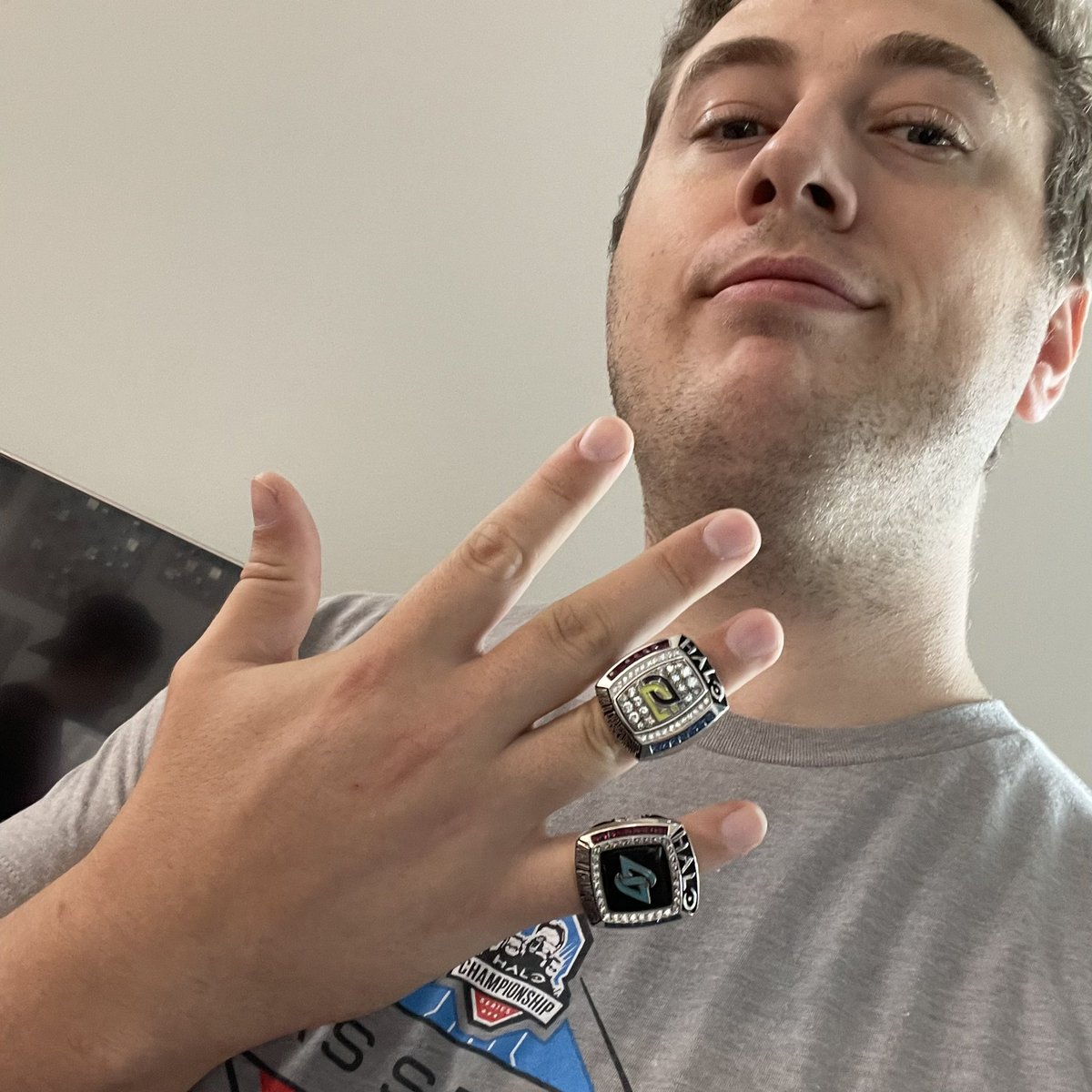 Frosty’s first LAN event was UGC St. Louis 2015, which he attended as a member of Dark Matter. They placed 22nd at the event. Frosty then joined Reality Check in time for Gamers For Giving 2015, and the team placed 7th, pulling off a major upset over Noble Black in the process. Despite this, Reality Check did not qualify for the season finals at PAX East 2015, and Frosty declared his free agency on Twitter shortly after.

Shortly after declaring free agency, Frosty was signed by Velocity. However, this would not last into season 2, as Frosty was released shortly after. He would not attend Iron Games Atlanta 2015. He joined eXcellence alongside Cobys2Fast, UnLegit and eL TowN in May. eXcellence made it to the HCS Season 2 Finals, where they placed 8th.

Frosty left eXcellence during the offseason, and ended up on eLevate alongside Randa, Suspector and UnLegit. He also formed the temporary team Daytona with APG, Aries and Rabid for Iron Games Daytona 2015. On December 2nd, it was announced that Frosty was joining Counter Logic Gaming alongside veteran Halo pros OGRE2, Royal2 and SnakeBite. In January, CLG replaced OGRE2 with Lethul. Frosty’s first tournament with CLG was the X Games Aspen 2016 invitational, where they were defeated by Evil Geniuses in the finals. At HWC NA Regionals, CLG dominated the event, sweeping EG in the semifinals and defeating Denial eSports 4-2 in the finals. This was Frosty’s first major tournament win. Heading into the Halo World Championship 2016 with an unprecedented scrim record of 240-31, Frosty and the Counter Logic Gaming squad looked completely dominant, and in response, were awarded the #1 seed for the event. During pool play the team played as expected, only dropping 1 game to Epsilon eSports and headed into bracket play with ease. With only a scare from an early surprise quarterfinals match again Evil Geniuses, and dropping 2 games to the young Denial eSports in the semifinals, Frosty and crew rocketed past Naded and the emotional Team Allegiance in a 4-0 fashion, proving his worth once again on Counter Logic Gaming and securing the $1,000,000 1st place prize at the Halo World Championship.

Following Worlds, CLG were the first team to qualify for the Summer 2016 Pro League. Posting a 13-1 record, with their only loss being to Enigma6 Group, CLG went into the Season Finals as the #1 seed. They went 3-0 at the event, taking 1st place after defeating Enigma6 in the finals.

On September 14, the first day of the Fall 2016 Pro League, the CLG roster was acquired by OpTic Gaming. After early losses to Evil Geniuses and Team EnVyUs in the season, the OpTic roster showed that it was still the team to beat on LAN by winning its fourth straight event – HCS Orange County 2016. A few weeks later, LethuL opted to fill in for Team EnVyUs captain Mikwen, who was unable to attend UGC St. Louis 2016 with the squad. Under the team name Truce, referencing the former bad blood between LethuL and EnVyUs member Snip3down, the roster took 1st place at the event. OpTic ended up finishing the season with an 11-3 record, good enough for 2nd place. At the Season Finals, OpTic came out strong with victories over Team Liquid and Team EnVyUs, but in the Grand Finals, it was EnVyUs that won two straight best-of-7 matches to steal the throne from OpTic.

At the first event of the Halo World Championship 2017 qualifying season, UGC St. Louis 2017, OpTic defeated Team EnVyUs in the Winners’ Finals and took out Team Liquid in the Grand Finals to reclaim 1st place. At ME Las Vegas 2017, OpTic dominated the competition, sweeping Splyce to qualify for Worlds, sweeping Str8 Rippin and defeating Team Liquid twice (4-2 and 4-1) to take 1st place and solidify themselves as the team to beat going into the biggest event of the year. At Worlds, OpTic dominated their pool to earn a top seed going into the Championship Bracket. In the bracket, OpTic swept through FAB Games eSports and Luminosity Gaming before dismantling Team Liquid 4-1 to earn a spot in the Grand Finals. In the finals, they met Team EnVyUs, who were coming off of a run from all the way back in LB Round 1. OpTic made a statement, taking a 4-0 victory and securing their second straight World Championship.

At the first event on the 2017 settings, UMG Daytona, OpTic won its pool decisively and moved onto the Championship Bracket, where they swept Evil Geniuses before winning a 3-2 series over Team Liquid. In the Winners Finals, they beat Team EnVyUs 4-2 in their first match on the new settings. Not done, EnVyUs came back through the Losers Bracket and won two straight game sevens to steal the event from OpTic’s hands. The OpTic roster returned unchanged for the Summer 2017 Pro League season. They finished in first place with a record of 6-0, their only loss coming to Team Liquid in the final week of the season. OpTic came out hot at the DreamHack Atlanta Finals, sweeping EnVyUs in the third round. In the Winners Finals, OpTic were beaten 4-1 by Splyce, the second place team from the Pro League. After handily 4-0ing EnVyUs in the Losers Finals, OpTic had a chance at redemption against Splyce in the Grand Finals. Unable to even force a second series, OpTic were beaten 4-2 and had to settle for 2nd once again.

In the Fall 2017 season, OpTic finished in second with a record of 6-1, with their single loss coming against 1st place Team EnVyUs. OpTic came out strong early at the DreamHack Denver Finals, taking out Ronin Esports and Team Liquid with little resistance. In the Winners Finals, OpTic got revenge on Splyce with a 4-2 victory. In the Grand Finals, they were met by Team Liquid, coming off dominating performances against Splyce and Team EnVyUs. OpTic were able to reverse Liquid’s momentum however, winning the series 4-1 and reclaiming their spot on top of the league.

Going into Halo World Championship 2018 season, OpTic, now the longest tenured Halo team of all time, predictably stuck together. They went into MLG Orlando as the second seed. For the first time ever, they were not only beaten in the Winners Semifinals, but in a 3-0 sweep by Team EnVyUs. OpTic steamrolled through the Elimination Bracket, sweeping Renegades and Team Reciprocity before taking out Team EnVyUs in a rematch to secure a top two finish. In the Grand Finals, OpTic’s comeback was halted by Splyce, who took out the Green Wall 4-2.

On March 8, the OpTic roster was unexpectedly released by the organization as they exited Halo. The orgless roster eventually settled on Tox as a new name. In Columbus, things started out well for Tox as they won their pool with ease, swept Str8 Rippin, and took out Orlando champions Splyce in the winners semifinals. This was followed by a win over Team Reciprocity which put them in the finals against Splyce. Splyce got their revenge, defeating Tox 4-0 and 4-1 to take their second straight event over Tox/OpTic.

Frosty competed at DreamHack in Dallas on June 2nd, 2019 and took 2nd place in the Halo 3 tournament. Then on September 8th, he took 2nd place at the UGC Halo Classic tournament in Atlantic City.

Frosty made a name for himself in Halo where he became a two time Halo World Champion, so his decision to switch to Call of Duty was highly anticipated. Frosty joined the org Enigma6 Group, which has a history of picking up new talent such as Dashy, Decemate, and ABeZy. Frosty joined the team to play alongside General, KiSMET, Diabolic, and Kade. This team was performing decently online, but it seemed that Frosty needed some time to adapt to CoD. At their first LAN event, the team added Sender as a coach, but still struggled only placing top 32 at the CWL Las Vegas Open. This was very disappointing, but was just good enough to qualify for the CWL Pro League Qualifier. Ahead of the qualifier, the team began showing improvements online including winning a ProDown tournament. At the CWL Pro League Qualifier, Enigma6 Group showed improvements by going 5-1 and topping their pool with the young talents Frosty and KiSMET showing off. In the CWL Pro League, Enigma6 Group went 3-4 in their first two weeks and seeking to improve before the next event, the team dropped Kade for Chino. This change seemed to help as the team rallied to a top 6 at CWL Fort Worth. Back in the CWL Pro League, the team despite playing well at Fort Worth, went 0-4 and decided to drop Chino and Diabolic for GodRx and Jetli. This change did not seem to help at CWL London as the team placed in the top 16. In the CWL Pro League the team saw improvements going only 2-5, but four of those losses cam in close game 5s series. At CWL Anaheim, GodRx went off and carried Enigma6 Group to another top 6 placement. Unable to get past top 6, the team decided to make a change and controversially decided to drop Frosty. This left Frosty scrambling for a team to close the year and he ended up on Midnight Esports to team with Parasite, LlamaGod, Royalty, and Zaptius with Saint as the coach. In the last week of the CWL Pro League Midnight Esports went a surprising 3-1 and Frosty emerged as a top slayer for the team. At the CWL Pro League Playoffs Play-In, Midnight Esports managed to reverse sweep elevate, but lost to Luminosity Gaming and missed out on the CWL Pro League Playoffs.

On October 2nd, 2020, Frosty announced that he signed with the Sentinels for the 2021 Season of the Halo Esports.