Generic team for listing stats on the website. All placements over 4th place, such as 5th, 6th, 7th, 8th, and so on, will be covered by this team.

All Pro COD Teams Past and Present

Team FeaR is a professional Call of Duty team. 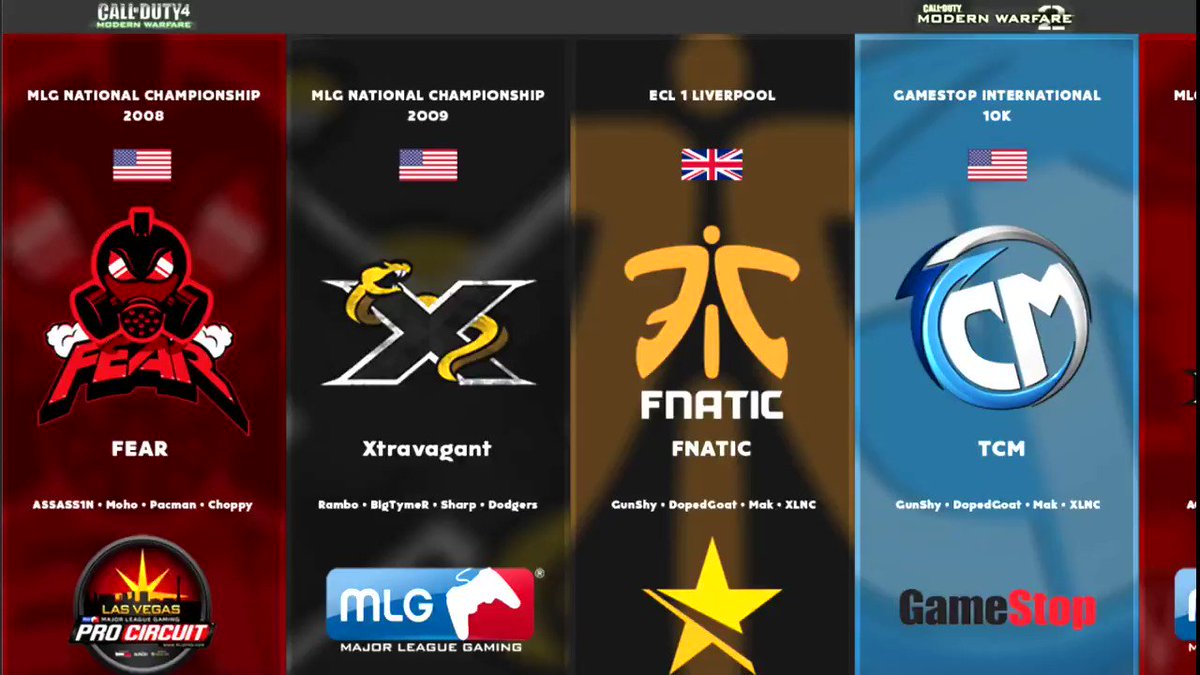 Every professional Call of Duty event win in chronological order.

The first roster consisted of Moho, Choppy, Pacman and ASSASS1N.

The Team FeaR organization competed at the MLG National Championship in November of 2008 and took 1st place.

They returned in 2009 hoping to defend their title as National Champions, this time with players ProoFy, Punisher, Moho, and ASSASS1N.

However this time they were only able to take away a 3rd place finish with $2000.

Two years after their previous event at the MLG National Championship 2009, FeaR looked to compete at an event again, this time in Call of Duty Black Ops at MLG Columbus.

They went into this event with another different roster, with Dedo and John joining the ever-present Moho and ASSASS1N.

This would be their first of many Black Ops events as an organization, although the roster would change many times.

Here they were unable to take away a win, but still managed a very respectable 3rd against a field including an incredibly strong OpTic Gaming team of BigTymeR, Rambo, MerK and JKap.

Here they would come one step closer to that win, finishing 2nd and taking home $6,000, with PHiZZURP and TwiZz on the roster instead of Dedo and Moho.

Yet again they were beaten by very talented opponents, with this time it being Quantic LeveraGe, made up of ACHES, TeePee, Scumpi and ProoFy.

One month later there were able to get that win at MLG Raleigh, beating a Collapse roster made up of TuQuick, Parasite, Apathy and Pikachu to take away $10,000.

However, FeaR were unable to turn this win into another at MLG Orlando, as they placed a slightly disappointing 4th, taking away $2,800, with OpTic able to take another win.

Their Black Ops season would not end on a high, as they were only able to place a disappointing 8th at the MLG National Championship 2011, with Quantic Nex-TT-hreat, which included the likes of Censor and Vengeance, able to come away with a win and $50,000.

The first of these was the UMG Invitational, which took place in Chicago, Illinois.

They would go into this with a very different looking roster of John, KiLLa, PHiZZURP and Ricky.

Here they would place first, taking home $2,400 with an Obey squad featuring NameLeSs placing in second.

Black Ops 2 FeaR would go into Black Ops 2 with yet another new look roster of Moho, ASSASS1N, Sharp and John for the Call of Duty Championship 2013.

Here, against a very strong field including the likes of Fariko.Impact, EnVyUs, OpTic Gaming and compLexity.

FeaR would be able to come away with a placing of 5th as well as $70,000, finishing above European giants Epsilon eSports.

However, despite this relative success FeaR would not compete at another event until UMG Dallas 6 months later.

They, yet again, had a new look squad of Loony, Moho, Pacman and Whea7s, but they could only manage a 6th place finish, taking away no prize money.

The team will now be looking for success at the up and coming MLG Columbus event and further into the future.

They would get 17-20th Place at MLG Columbus 2014, Team FeaR has not competed at an event since.

CompLexity Gaming is a professional esports team which was founded by Jason “1” Lake in 2003 as a Counter Strike 1.6 clan. They are one of the world’s premier professional gaming brands and a global leader in esports entertainment.

This is a list of Complexity Gaming’s social media profiles on various platforms.

This is the official Complexity Gaming Twitch live stream.

This is a playlist of all of the official Complexity Gaming YouTube channel videos.

This is the official Complexity Gaming Discord channel.