This is a list of Florida Mutineers social media profiles on various platforms.

Official Twitter of Florida Mutineers. Florida’s home of @CODLeague. Family member of @Misfitsgg. | Use code MUTINEERS for 15% off on D2D: https://t.co/IfaBYxUYxW

Your setup could use a refresh for the Cold War season. 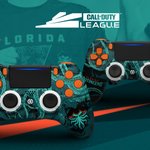 On May 18th, Prestinni left the team to join the Chicago Huntsmen and on May 22nd, Owakening joined the team while Maux was moved to a substitute position.